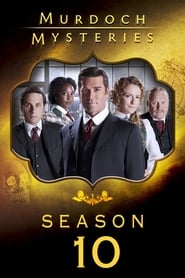 Season ten kicks off in grand style with a two-part mystery set in the world of Toronto debutantes, whose coming out is interrupted by the 1904 Great Fire of Toronto. Following the opener, Murdoch and the rest of Station Four find themselves embroiled in cases both fantastical and historical. From a murder involving the Olympic Champion Canadian soccer team, an investigation into a man wrongfully jailed, the introduction of H.P. Lovecraft (the master of the macabre), a wronged woman who goes on a serial killing spree, to the death of a prize pooch at a dog show, there is very little rest for Murdoch, Ogden, Brackenreid, Crabtree, James and the rest of Station Four. And as all this goes on, Murdoch tries to deliver on his promise to his wife and build her the home of her dreams. Or is it his nightmare? No matter what changes the future holds, Murdoch and the team will be there to solve each fresh mystery with tenacity and ingenuity.