On iCarly, Sam and Freddie show their viewers how to make “Spaghetti Tacos”. Food TV enjoyed their presentation, and called their apartment to tell them that they were going to be interviewed. During the interview, “Ricky Flame” comes in and challenges them to a “Food Fight”, a parody of the real Throwdown! with Bobby Flay, competing over who can make the best Spaghetti Tacos. When the iCarly gang wins, Ricky is crushed, and quits cooking forever. The iCarly gang try to cheer him up by tempting him with cooking, but his head falls in the salad. Later, he sends them a video, telling them to meet him at the wrestling ring. When they get there, Ricky is wrestling little kids because he figured out that he doesn’t like to cook, but he likes to win, and when he’s fighting kids, there’s no way he can lose. Then Sam brings him down, and the show ends. Meanwhile, Spencer has a vision of the future, that he will hug a character from Galaxy Wars when he is shocked by Sam’s new 100 volt locker security system and goes to great measures to make sure it comes true. 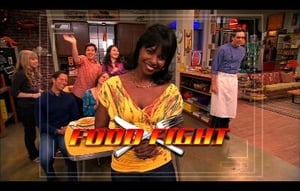