Workers laboring to build a bridge across the Don River make a grisly discovery – entombed in the swamplands bordering the river are the well-preserved bodies of a man and a woman. Called to the scene, Murdoch and Ogden quickly determine that the couple was murdered. When a third body is then discovered, Murdoch has to re-evaluate the nature of the crime. 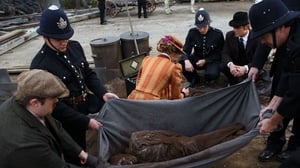