As the sisters of the Immaculate Conception prepare to put the coffin of elderly Sister Ignatius into her final resting place in the convent’s cemetery, a young novitiate peers into the dug grave and sees something poking out of the dirt – a human hand. Murdoch is called to the scene and his constables lift the bloodied body of the convent’s gardener out of the grave. But a dead body is not the only surprise the convent holds. 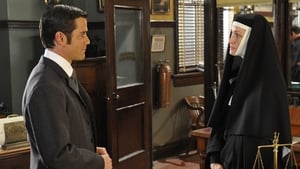