Lucy persuades Lee to pretend to be gay after she lies to a business acquaintance Guy, who she was told is gay himself, by telling him she lives with a gay flatmate to prove she is not homophobic. However, Guy soon starts to get suspicious and tests Lee’s sexuality by taking him to a gay bar. Later, Guy overhears Lee saying to Tim, who had started to think Lee was gay, that he is not gay. When Lucy then explains to Guy what happened, he reveals he is not gay and he and Lucy kiss. 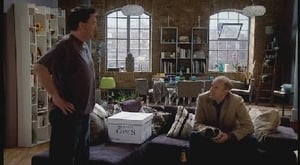