As eight hours has passed since the escape, Michael, Lincoln, Sucre, C-Note and Abruzzi attempt to evade their seekers. Bellick is forced to relinquish the command of the search party to FBI Special Agent Alexander Mahone whose ingenious approach makes Michael’s life as a fugitive harder. As a result from her overdose, Dr. Tancredi is in critical condition. A short-handed T-Bag faces the ultimate challenge. 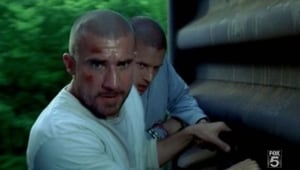