The Body in the Bag

An unidentifiable body is discovered in the shower of an upscale home belonging to a young female socialite. With the help of nosey bones expert and Jeffersonian “squint” Clark Edison, skeletal reconstruction and evidence in the drain reveal that the victim was a young girl employed by a counterfeit handbag distributor. The team learns that the victim supplied counterfeit purses to her socialite acquaintance, and after interrogating the self-centered socialite and sifting through footage on a hidden camera, they discover evidence linking them to the murderer. Meanwhile, Angela and Hodgins discuss their future home and where they want to raise a family, and Booth opens up to Hannah about Brennan’s feelings for him 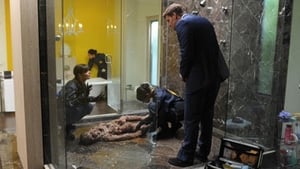