The Doctor in the Photo

Brennan gets a glimpse into her own life when the body of a brilliant and career-driven surgeon is found in a rough neighborhood with multiple fractures in her skull and no indication as to how or why she was there. While the team investigates the case objectively, Brennan struggles to separate her own life from the victim’s as she perceives many parallels between them the more she learns about the victim’s past. Meanwhile, evidence found at the crime scene brings the team closer to solving the case, but it’s Brennan’s unique perspective that propels her to retrace the final events of the victim’s life. With the reassurance of a new friend and Jeffersonian security guard, Micah Leggat, Brennan makes a discovery about herself and learns a lesson about taking chances. 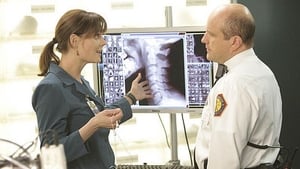