The Rules of the Game

As a favor to Derwin, Melanie attends the first Saber Sunbeam meeting of the season, only to learn that unlike the wives, football players’ “girlfriends” are not considered legitimate and are treated as such by the other wives. On the same day, Derwin attends his first rookie seminar where he is given a lecture about gold diggers, STDs and is hazed by the other players. Later that night, Melanie and Derwin attend a party where Melanie, has a conversation with another player and is perceived to be flirting with him. When the player’s girlfriend confronts Melanie, she realizes the rules of the game in the pros will take some getting use to. 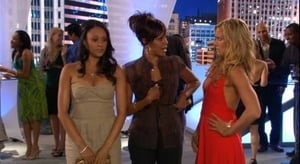