The Blood from the Stones

An undercover police officer, who was investigating a string of ATM robberies, turns up dead in a van with a bag of diamonds found inside his mutilated body. So the Jeffersonian team must figure out whether or not the ATM robbers are also murderers, or if the cop was crooked. Meanwhile, Brennan is the subject of a documentary commissioned to raise funds for the Jeffersonian, and she struggles to be likeable on camera. 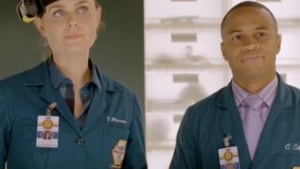