The Spark in the Park

The Jeffersonian team investigates the murder of a nationally ranked gymnast, whose remains were hit by lightning and scattered throughout a public park. Although evidence points to a fellow gymnast as the key suspect, Brennan and Booth discover the victim was leading a double life. Meanwhile, Booth gets upset when Brennan shows surprising empathy for the victim’s father, and Cam confronts the woman who stole her identity. 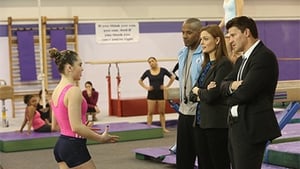