Bea learns that Simmo’s daughter is working for Brayden. She decides to make Simmo paranoid about her daughter’s safety and gets Linda to lie to Simmo claiming she saw them together. Franky tries to use Maxine as her sidekick but she refuses. Boomer feels useless and accidently locks herself in a laundry shoot causing a prison lock down when they think she has escaped. Will violently attacks Fletch for sleeping with Meg. He also reveals that she was pregnant with his child and aborted it. 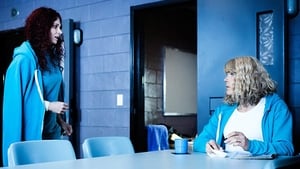