The iCarly crew tells their viewers to vote for David Archuleta on America Sings, who is crowned the winner. Feeling guilty about swaying the votes, they invite the America Sings runner-up, Wade Collins onto their show. Meanwhile, Sam teaches Spencer how to lie so he can deceive a local video store. 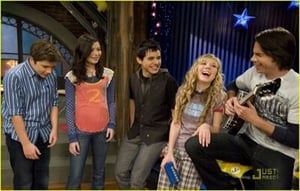