When Freddie offends an international internet sensation, Fred, he gets crushed and says to all of his fans that he will not make any more Fred videos. Carly, Sam, and Freddie soon start losing friends and acquaintances that are fans of Fred, and everybody in Ridgeway Jr High hates the iCarly group and Freddie is banned from all clubs. Then meet Lucas, Fred’s creator and portrayer, in his home in Idaho for Freddie to forgive him about the Fred videos comment. Lucas later apologizes because he wasn’t really mad, it was so Fred and iCarly had more ratings. At the end they apologize live in the iCarly webshow and presented a new Fred video with Carly, Sam, Feddie and Spencer guest starring as themselves with high-pitched voices like Fred. Meanwhile Spencer puts a Magic Eight Ball-like toy (called a “Magic Meatball”) in control of his life, with disastrous results. 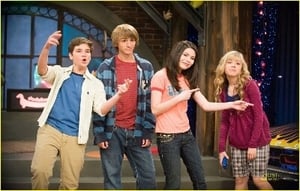