Carly and Spencer become upset when their new neighbor Griffin steals the motorcycle that Carly bought for Spencer in iPromote Tech-Foots. Spencer lets Griffin off the hook, but Carly becomes upset. However, when Spencer later goes out to get smoothies, he returns to find Carly and Griffin kissing on the couch. Spencer becomes furious and paranoid, forces Griffin to leave, and forbids Carly to see him, though he eventually allows them to resume dating. Meanwhile, Sam pays Freddie $50 to make a website and has a lawyer write them a contract. Freddie cannot keep up with her demands and tears up the contract, canceling the deal; Sam later makes $1,000 for selling the website. 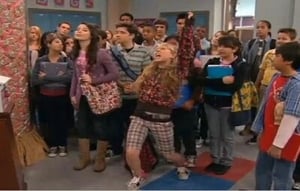