Sam has a twin sister named Melanie (Portrayed by Jennette McCurdy). Freddie is not convinced, and to try to prove it, he sees Melanie in person and invites her to a dance with him as his date. The plan to try to prove that Melanie is really Sam takes an unexpected turn when Melanie kisses Freddie, who then becomes extremely paranoid. Meanwhile, In the end, since Freddie refuses to believe it, Sam admits to Freddie that there is no Melanie. Satisfied, Freddie departs right before Melanie (who reveals that she still has romantic feelings for him) arrives to go to the mall with Sam and Carly. Meanwhile, Carly tries to tutor Chuck in math, and Spencer shows Carly how evil Chuck really is (with the help of a hidden video camera that Socko set up). Carly gets revenge on Chuck by telling him there’s a new number called “dirf” between 5 and 6, and because of this, Chuck fails his math test and Spencer gives his dad a brochure about a summer math camp called Camp Add-m-Up, sending Chuck to math camp for the whole summer. 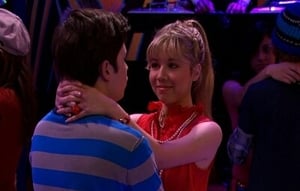