Carly and martial-arts champ Shelby Marx (Zoey 101’s and Spectacular!’s Victoria Justice) agree to have an exhibition fight for charity after Carly jokingly challenges her to a match. Unfortunately, Carly accidentally falls on Shelby’s grandmother during a press conference. Thinking Shelby wants revenge, Carly backs out of the fight, only to be ridiculed as a coward. Carly visits Shelby and apologizes, and the fight is back on. However, Nevel Papperman alters a clip of the press conference to make it look like Carly intentionally tackled Shelby’s grandma to dupe Shelby into fighting Carly. Shelby, furious, attacks Carly for real during the match, nearly killing Carly and Carly barely won the match with her life. Nevel’s plot is revealed, and the show concludes with Shelby appearing on ICarly. Meanwhile, Spencer suffers from ridiculous side effects while taking an experimental allergy medication. 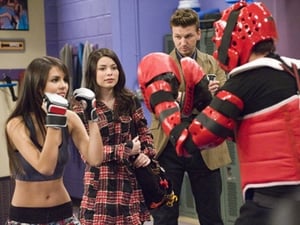